26th of January, 2020 started in the most energetic and noisy way possible for all the residents of Mumbai,
India.

For Throttle 97, India’s Largest Super and Sports Car group as part of their annual tradition was out on the
streets roaring with over 150 cars as part of the Republic Day Celebrations hosted by Mercedes AMG and
Ajmera Realty.

The Route primarily comprised of a gathering of all the owner’s in BKC with their respective cars and then
driving towards Ajmera iLand, Wadala.
The Streets of BKC woke up at the strike of dawn to the roaring stallions from Maranello making their
presence being felt by being there in large numbers. 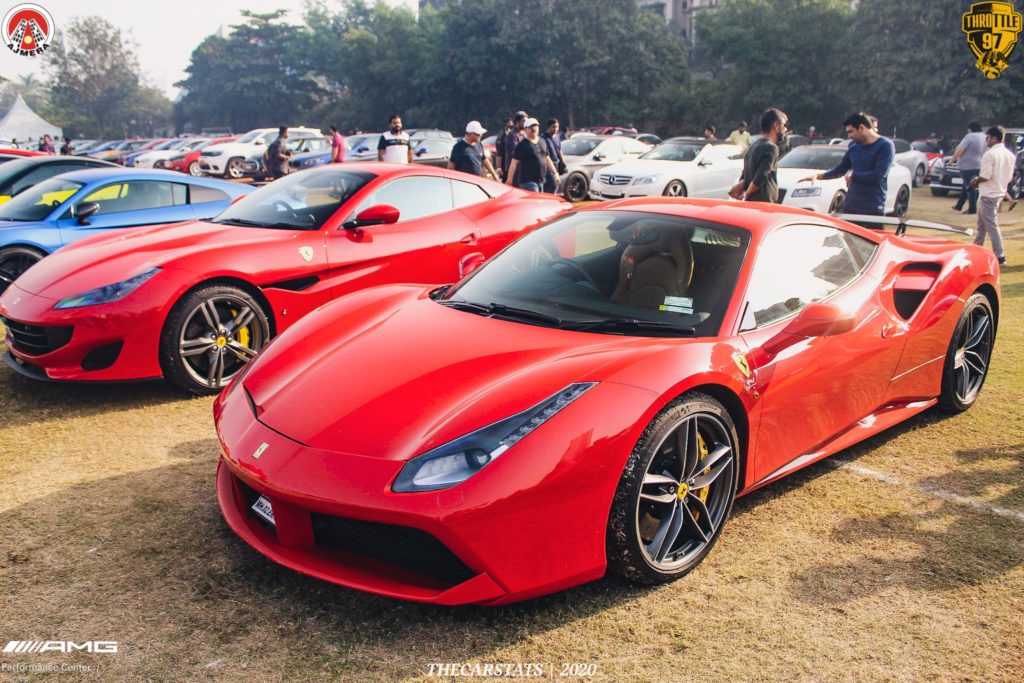 While most people in Mumbai choose comfort over anything else, Throttle 97 members prove otherwise by
driving cars meant for the Track on Public Roads like this Porsche GT2RS with a Weissach Package. 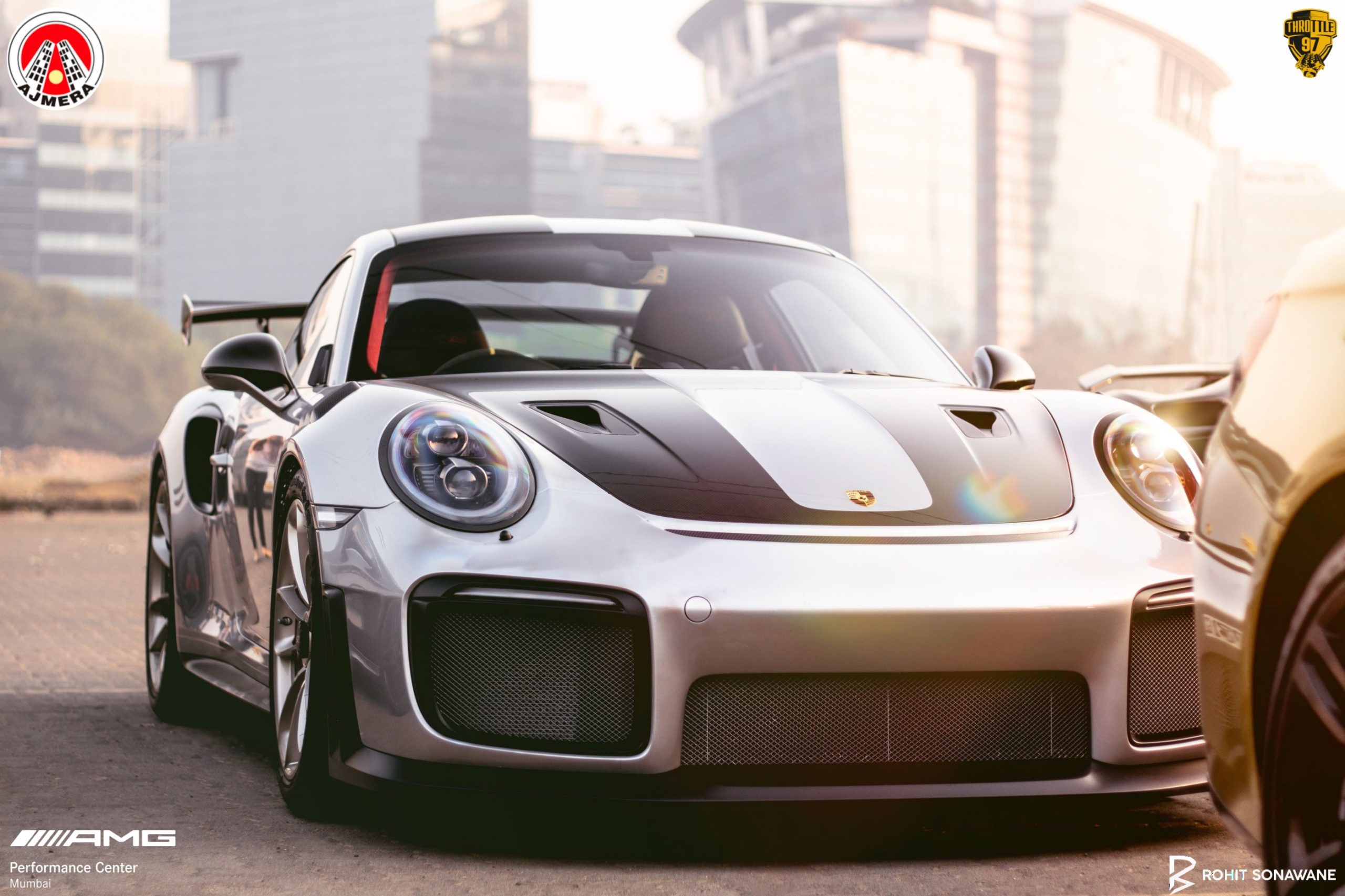 With the convoy now assembled in BKC, as the clock struck on 8’ oclock, the engines began to being fired up
and the colourful parking lot began to come to life with a soundtrack comprising of cars from Germany, Italy,
USA, Japan and the UK. 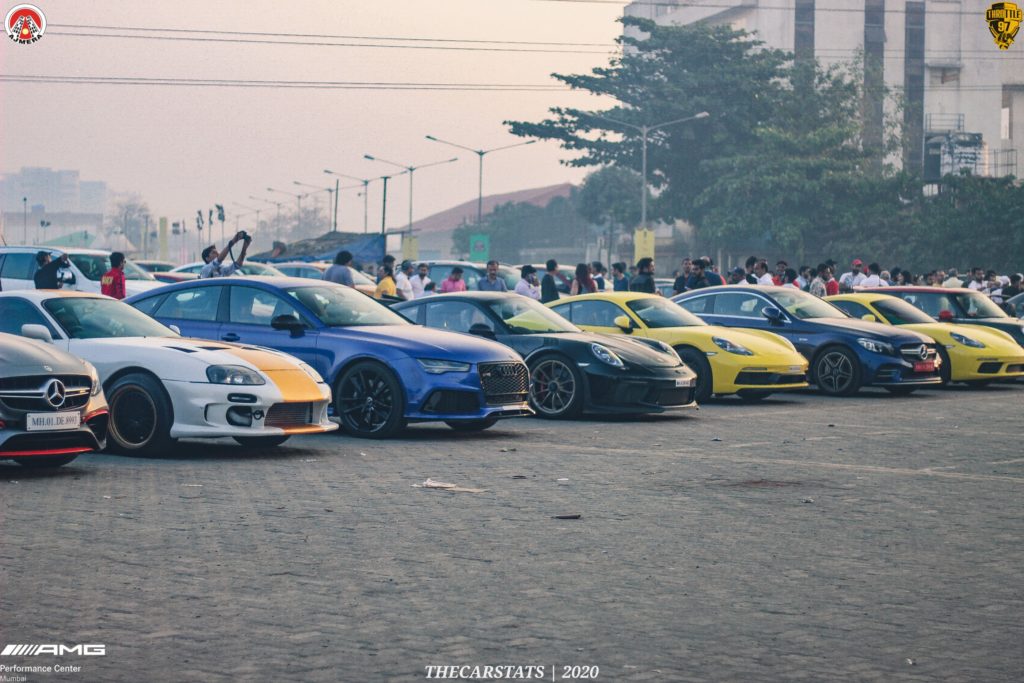 After a briefing by our founder, Mr. Damandeip Chaddha all the cars began to leave BKC and roared on as
passerby’s were left awestruck at the sheer versatalitity of the cars and size of the convoy.

The Convoy while exiting BKC and heading towards Ajmera iLand, Wadala. 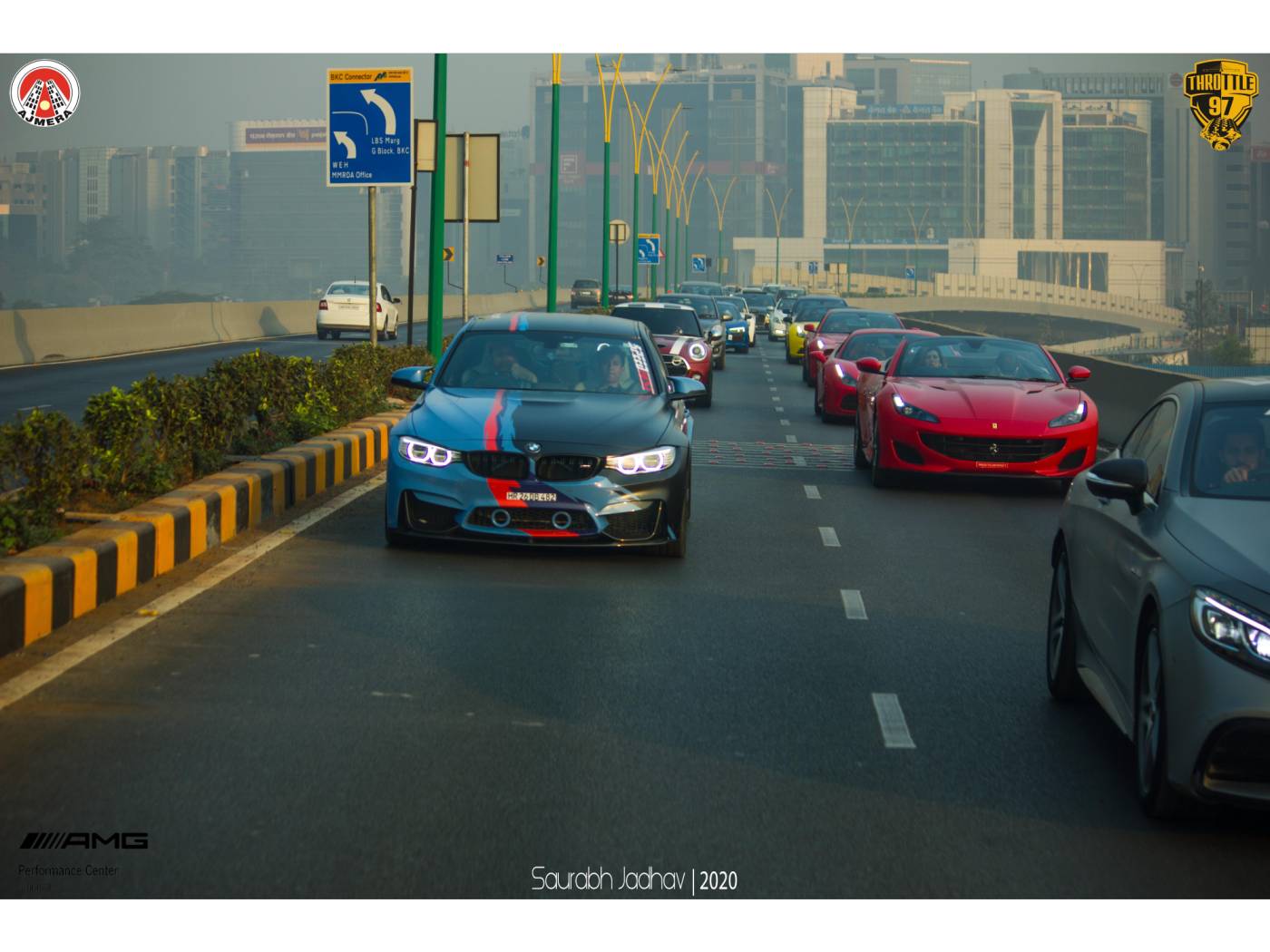 After a brief yet exciting drive the cars began to arrive at Ajmera iLand, Wadala only to be greeted by the
faces of hundreds of excited car enthusisats who had assembled there to view the machines on display. 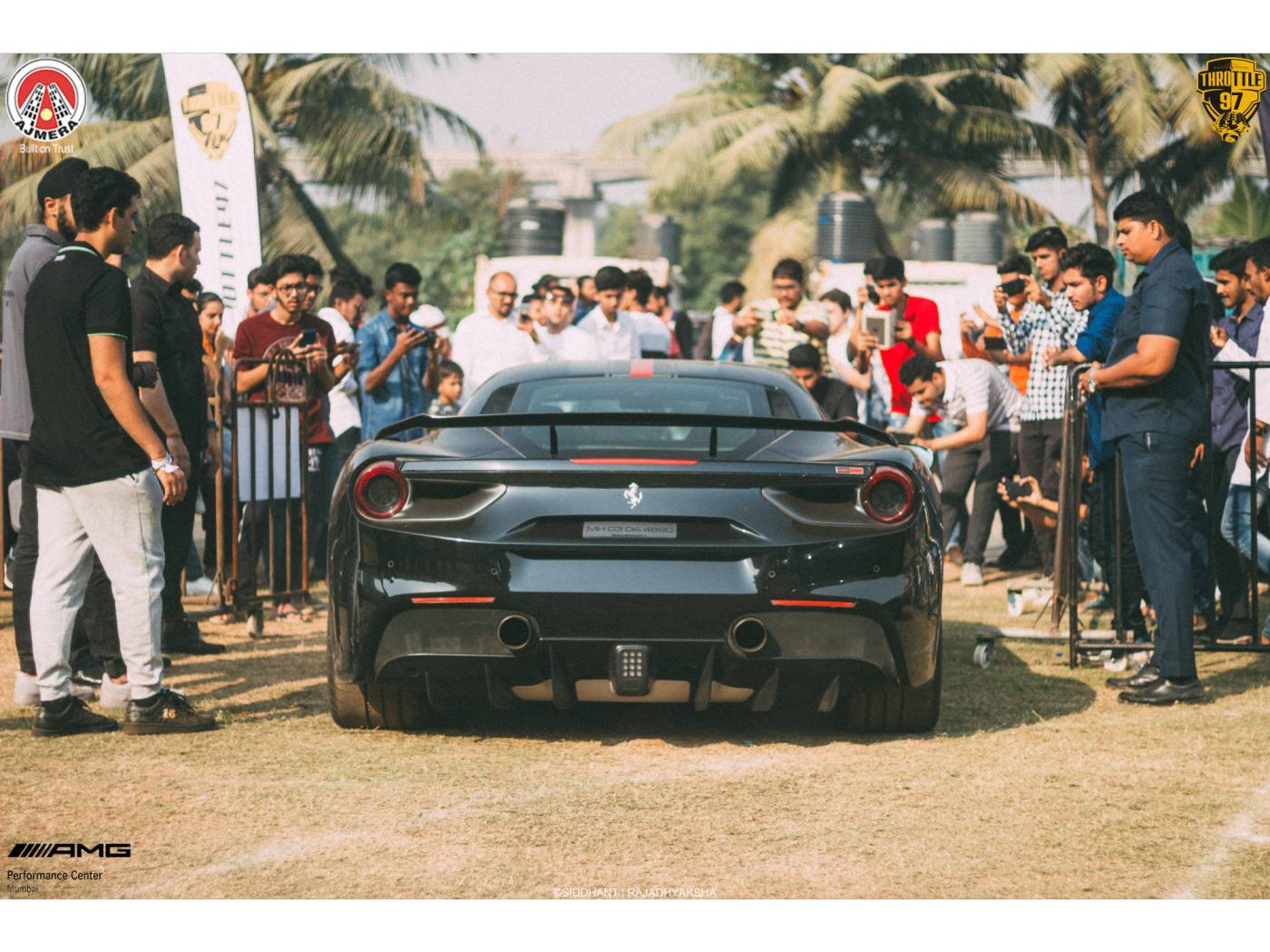 The cars were parked in a split of three rows with the front primarily comprising of the mid engined exotics,
then street sleepers and finally the Super Sport SUVs/ Saloons to finish off.
Post this in typical T97 style all the members, staff and spectators assembled for the National Flag Hoisting by
the members of the Ajmera Family. 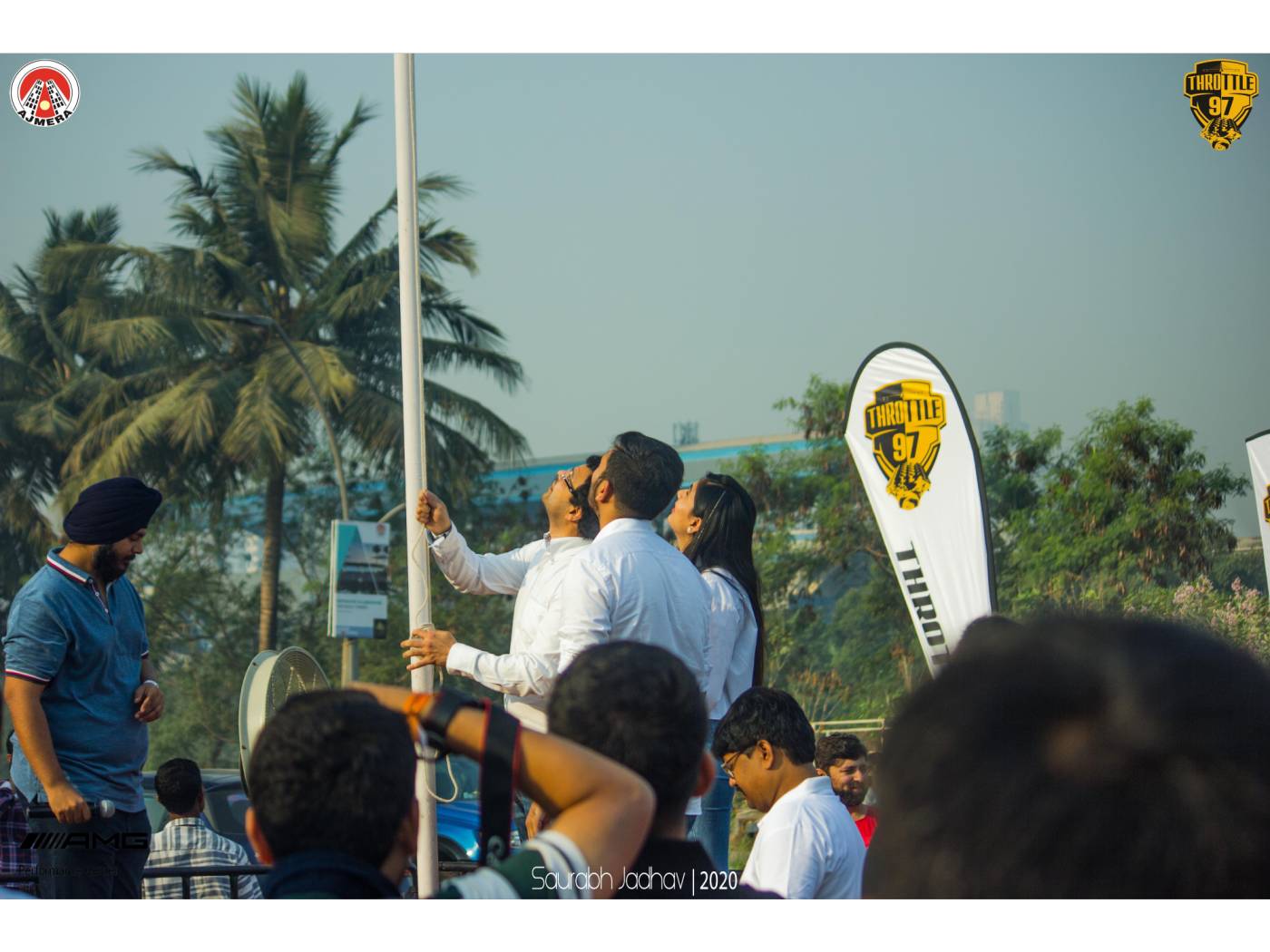 Following this the gates to the breakfast buffet hosted by AMG Performance were opened comprising of
Various dishes which were as diverse as the cars on display.

With a static display of cars, we at Throttle 97, also had a giveaway for drifting laps with our inhouse drifter
Damandeip Chaddha, causing a lot of people to scream in happiness while others looked on in awe. 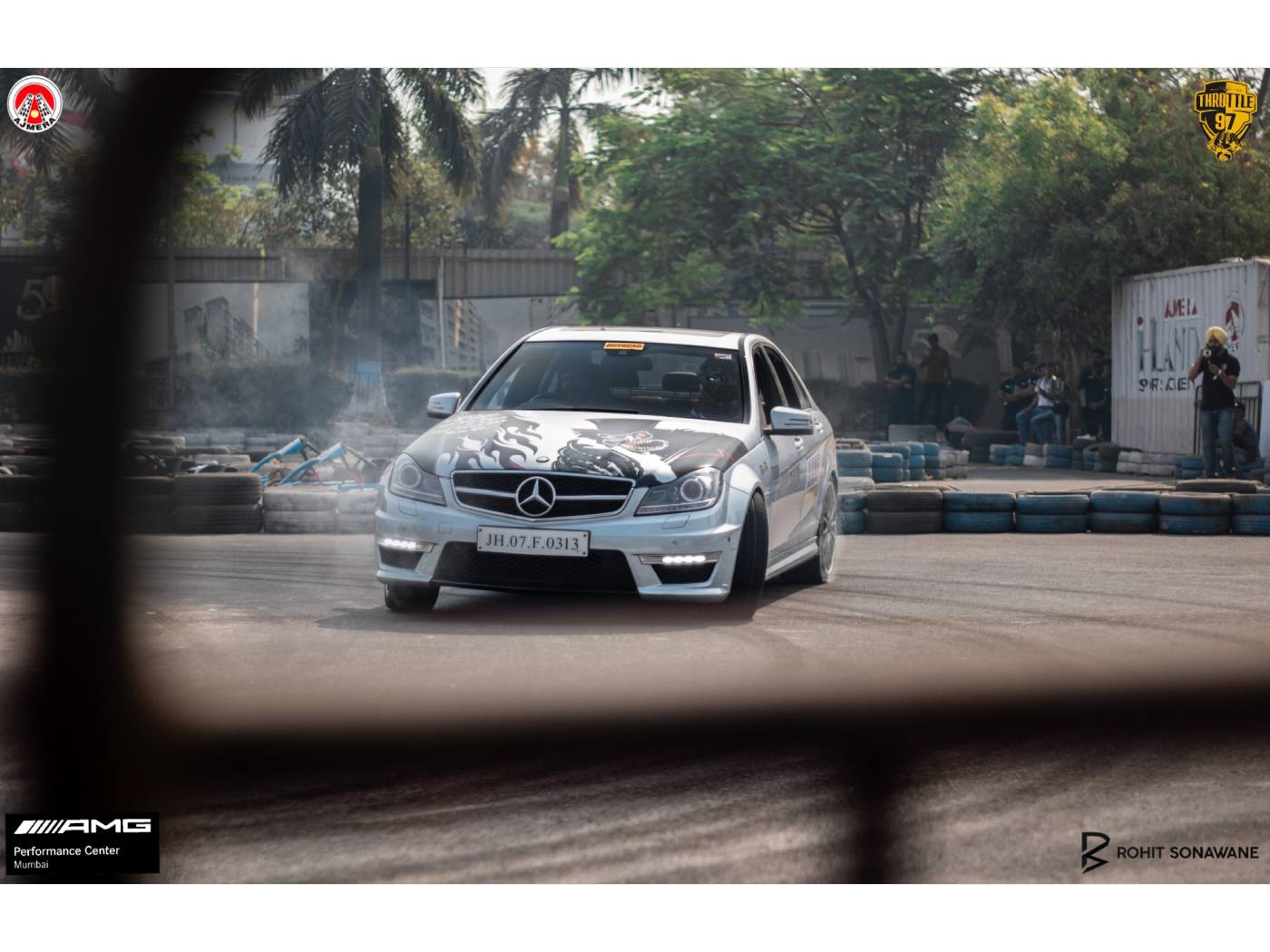 Throttle 97 is all about inclusion with all sorts of performace cars being part of the T97 Family.
Here we have the third row of cars comprising of all the sleeper cars, cars which look like normal diesel
powered family saloons and SUVs but have V8s plonked under their hood and performace for days to come.

A special mention to the KSM Mercedes W124 present below which now runs a 2JZ motor from the
Legendary Toyota Supra which is a perfect example of the world having no borders. 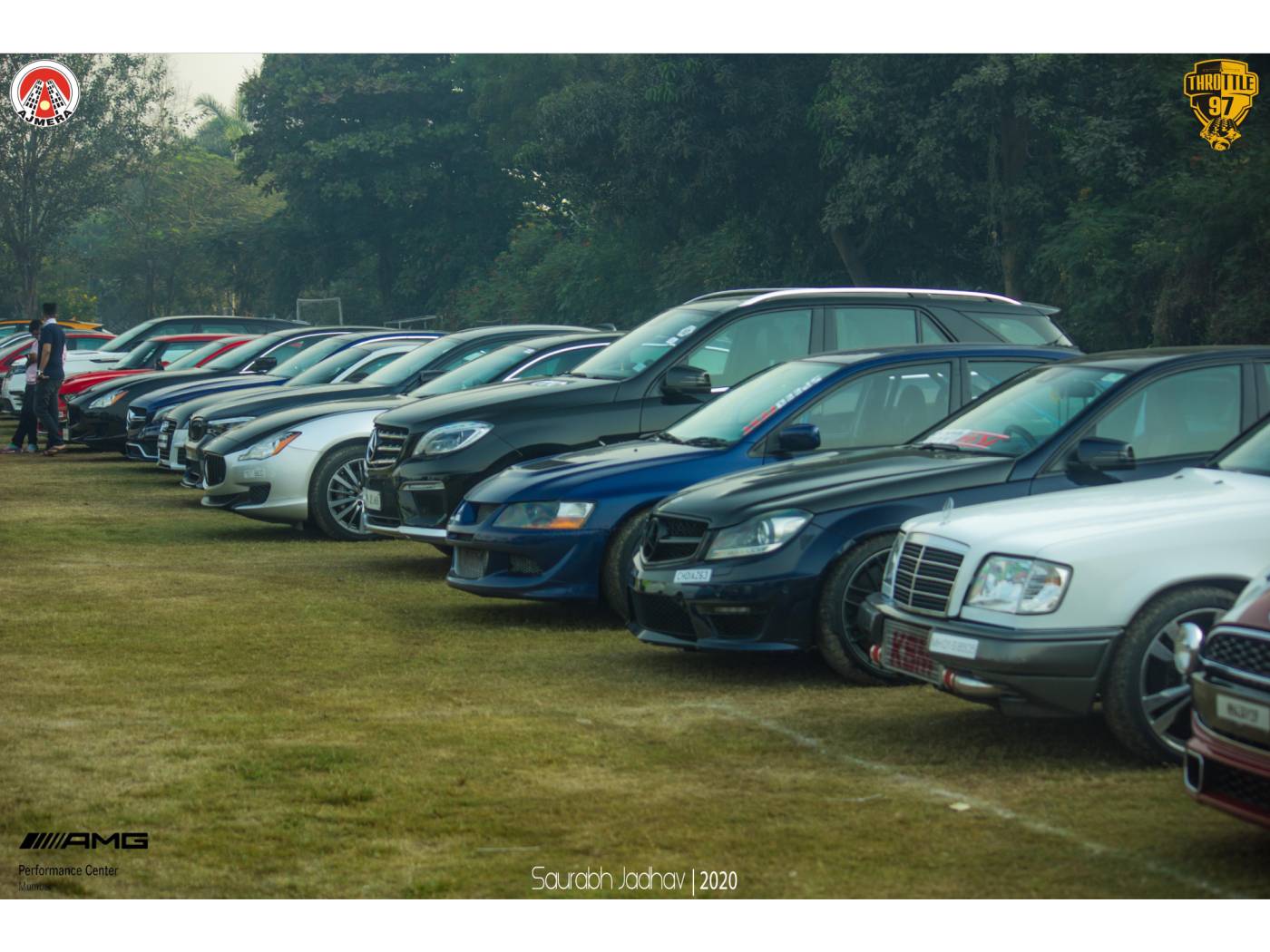 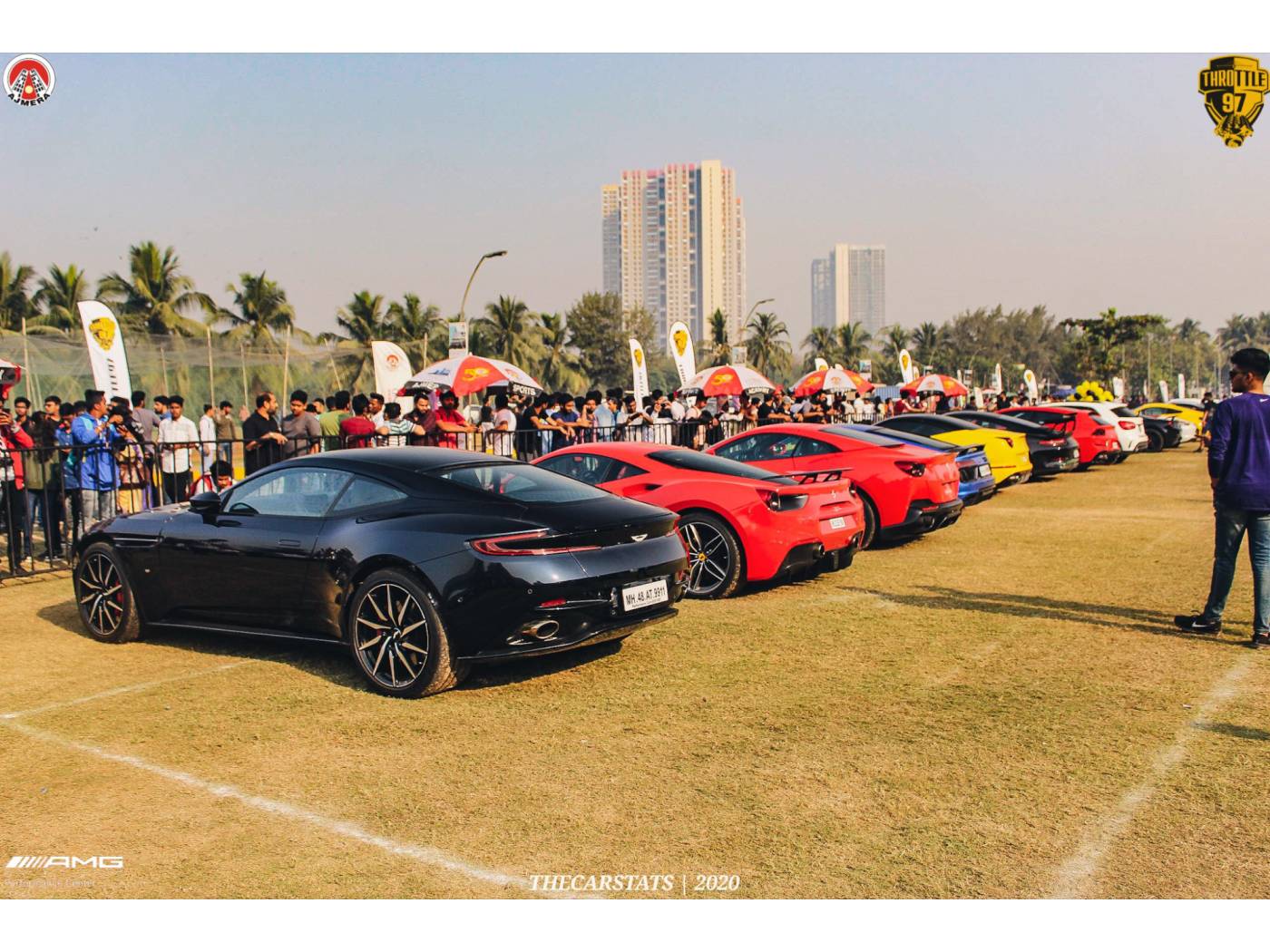 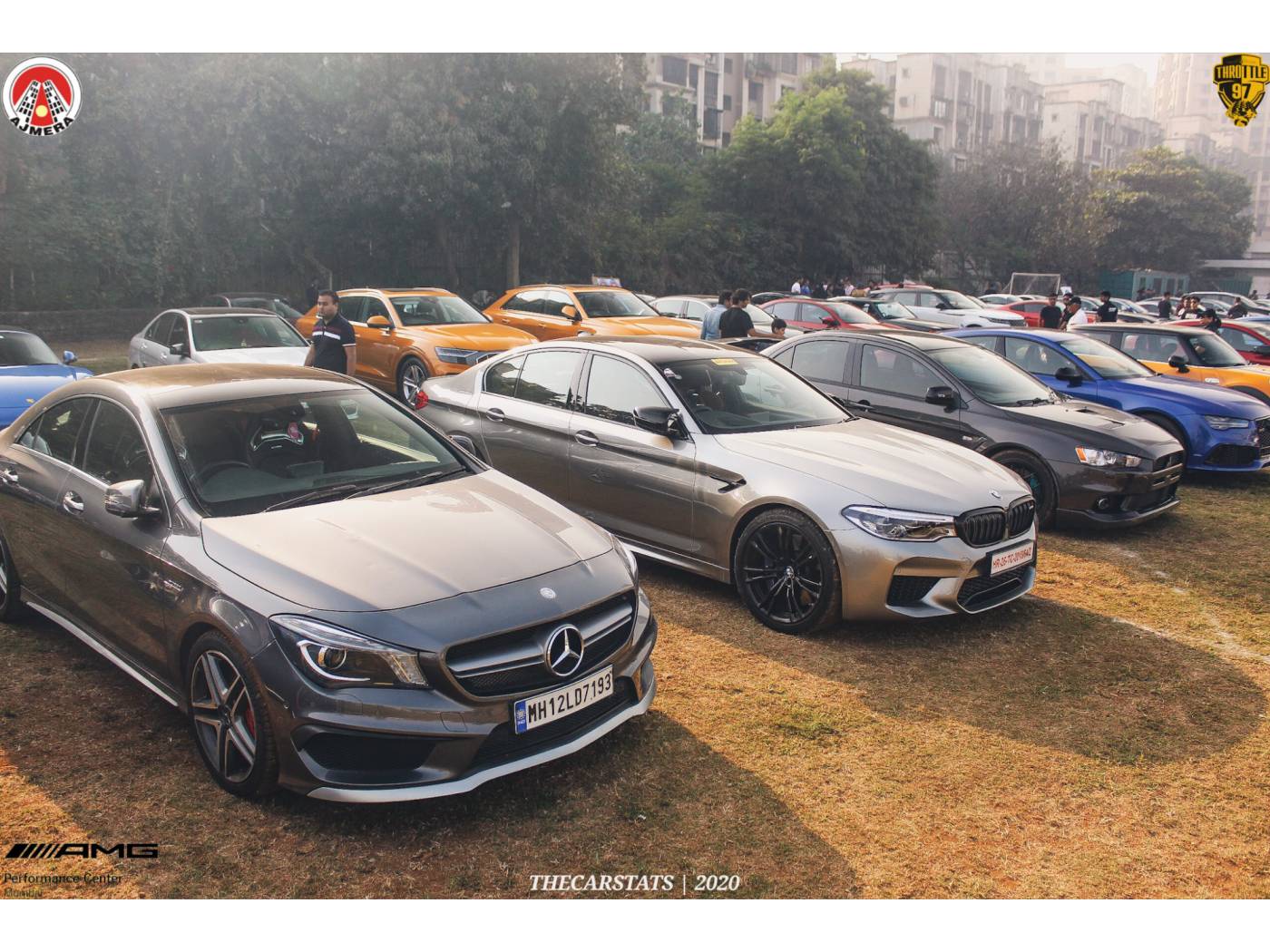 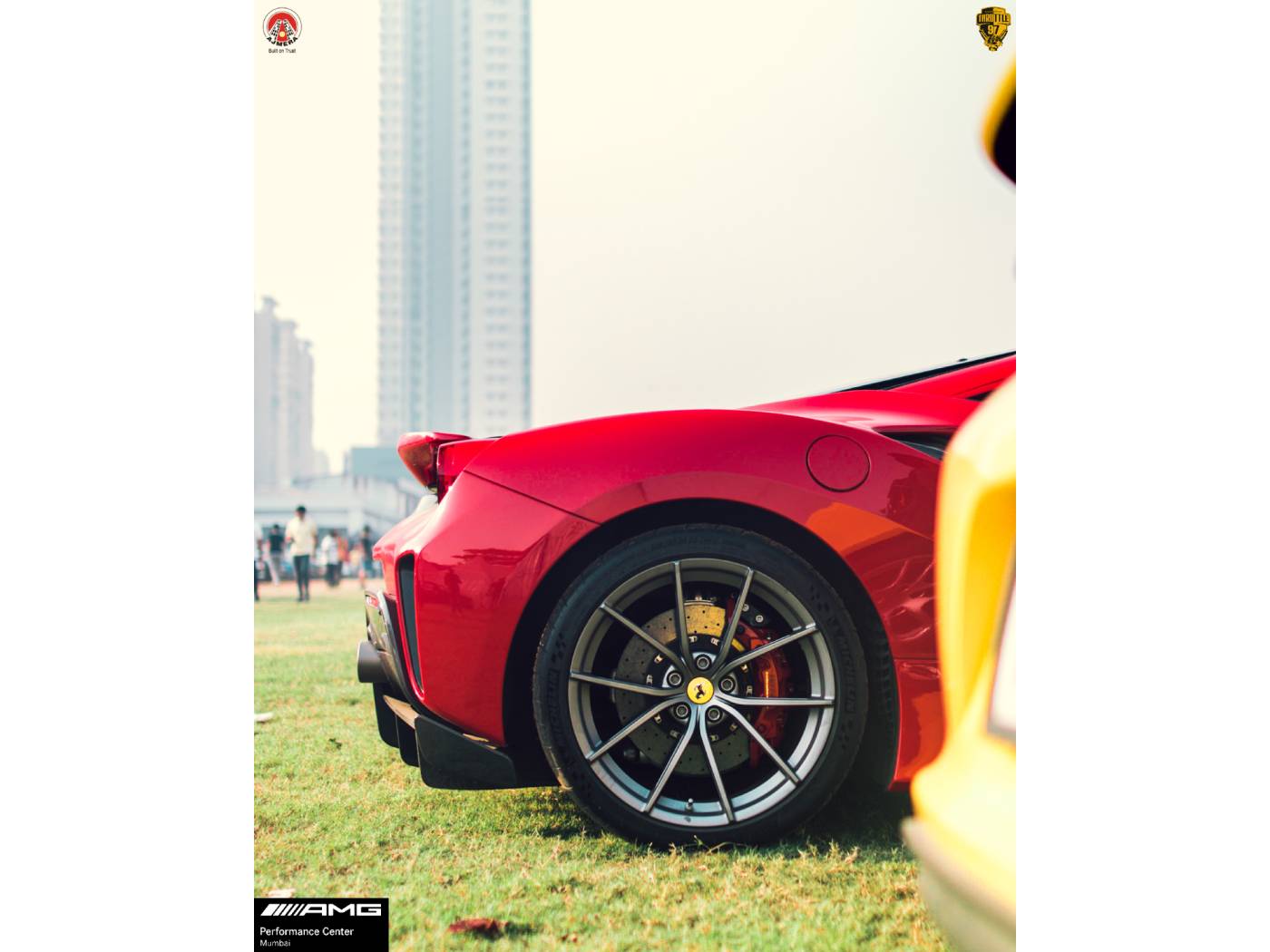